History of the Surprise Valley

The Early Pioneers and the Naming of Surprise Valley

As early as 1846, emigrants’ wagons rolled through Surprise Valley enroute to Oregon and the lower valleys of California.

Lindsay Applegate and Levi Scott branched off with their party from the California Trail at what later became known as Lassen’s Meadow (now named Rye Patch Reservoir and located near Imlay, Nevada). They followed a northwestern direction across the Black Rock Desert and through High Rock and Forty Nine canyons to enter California near its extreme northeastern corner, 29 miles southwest of today’s California-Oregon border. Their trail traversed Surprise Valley and went on to cross the Warner Mountains at Fandango Pass on their journey to the Willamette Valley, the principle settlement in the Oregon Territory.
The trail this party laid out became known by various names, including the “South Oregon Emigrant Road”, the “Old South Road”, or the “Lassen Applegate Trail”.

The importance of the tall, waving grass of this valley was intensified as most of the wagon trains arrived in late summer and early fall when bunch grass along the route had lost much of its nutrient value. Trains would stop long enough in the valley to harvest some wild hay to carry over the dry parts of the trail ahead.

Few early pioneers stayed on, though Mrs. I. Grove wrote, “They often spoke of this unnamed, unknown valley, little thinking that in a few years some would return…to make their homes here.” From 1848 through the mid-1860s, the route was much traveled, including by an influx of fortune-seekers drawn by the 1849 California Gold Rush. Others came after severe drought hit the Sacramento and San Joaquin Valleys in 1864, causing livestock owners to seek higher pastures. Others had left their border states rather than join in the Civil War, while former residents of Nevada’s once-booming town of Virginia City migrated to surrounding areas and began to build new towns. 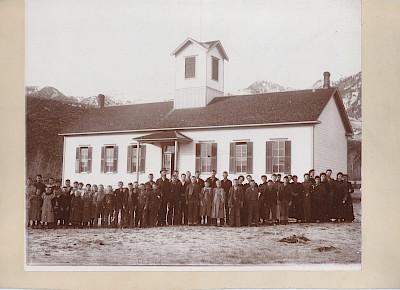 Local legend has attributed the name of the valley to early emigrants, though careful research has shown the name wasn’t actually applied until the early 1860s. The August 22, 1863 edition of the Humboldt Register out of Unionville, Nevada Territory says, “Surveyor General Houghton and his party appear to have discovered one of the most inviting valleys to be found in the state. The party named it “Surprise Valley”, which is appropriate as the men must have been greatly astonished to find such a valley in that region. It is 50 miles long and from 8 to 15 miles broad and contains three lakes. Grass, clover and wild rye were found growing luxuriantly. Fine timber in abundance covered the mountains which bounded on the west.”

The naming of the valley in the 1860s, rather than earlier, is substantiated by the fact that no records of travel or Army reports concerned with the area have been found using the name “Surprise”.
In one early account, Surprise Valley is said to have been known by the local Indians as “Kibeningnaredols” which means “Valley of the Long Mountains”.

The essay above was excerpted by permission from “Surprise Valley: A Collective History of Its Early Years of Settlement” by Tami Grove

The Establishment of Surprise Valley in the 1860's 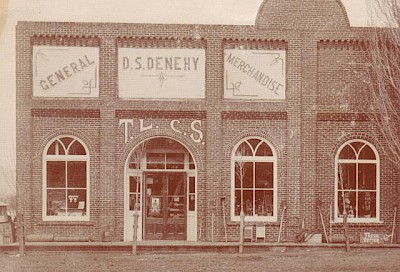 A bad drought that occurred in the Sacramento and San Joaquin Valleys in 1864 caused much of the livestock there to perish. Owners offered up to half their cattle herds to anyone who would take the animals into the high country to grass and water.

Men who saw this as an opportunity to have their own ranches and herds recalled the big grassy valley they had passed through while on the wagon train to California.

Meetings were held in Sacramento Valley towns and, with the hope of safety in numbers, men hired boys as drovers and decided to drive cattle to the mountains and face their worst fears: the Modoc, the Pit River ("Achumawi"), the Paiute -- all the Indian tribes in and around the Warner Mountains and its valleys. The settlement of Surprise Valley was finally underway. The biggest single year of settlement in Surprise Valley was 1864. 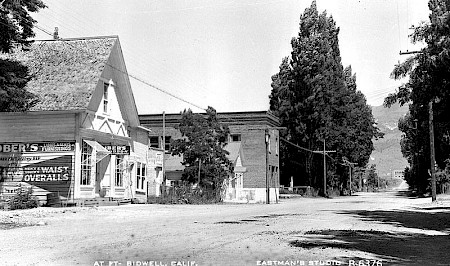 The cattle did well and many of the drovers who had brought cattle here were anxious to own their own land. They stayed on and quickly filed homestead claims.

The first settlement in the area was Deep Creek, located two miles south of the present town of Cedarville.

In 1865, a cabin was built at Deep Creek by Henry Talbert. Before long, James Townsend opened a store in the Talbert Cabin and Mr. Monchamp kept a station there. 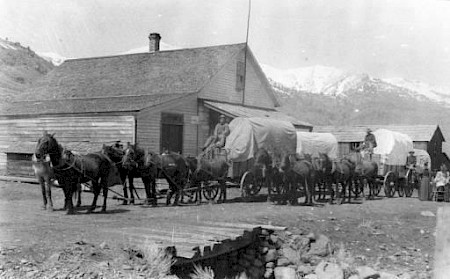 Townsend's prices were high - a spool of thread and a yard of calico each sold for 25 cents.

In 1867, two merchants from Red Bluff, John H. Bonner and William T. Cressler, came to the valley with a wagon of dry goods and set up business out of the back of their wagon at Deep Creek. It was a profitable venture. When James Townsend was killed fighting Indians, the enterprising young partners bought his cabin from his widow.

Cedarville was born in 1867 when Cressler and Bonner moved the cabin to a new location north of Deep Creek, locating it on a stream they named Cedar Creek. The two men obtained a large block of land in the area where they eventually laid out present-day Cedarville and also established a ranch. As their business grew and lumber became available, they built a new store.

Cressler and Bonner did an excellent job of laying out the town. Main Street was made wide enough to allow 18-horse freight wagons to easily turn around. Many of the streets were named for US Presidents. They also named streets for themselves and one in memory of Townsend which today is Highway 299 which runs from Alturas through Cedarville. Cressler and Bonner later built a large brick store building and big homes for themselves on either side, all of which remain important landmarks of the town today. 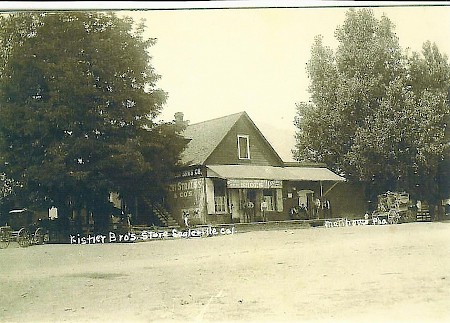 By 1880, Cedarville had a population of 219 residents and boasted of being the largest urban center in Surprise Valley.

Nestled in the Surprise Valley it's closer than you think!