Will & Debra Cockrell along with their 4 Children and 2 Grandchildren,
operate two successful separate businesses: the Cockrell Ranches and High Desert Lodging.
Will is from a generational family, that settled in Surprise Valley in the 1800’s. Making their grandchildren the 7th Generation. While Deb’s Family is a ranching family in Ft. Bidwell, and originally from ranching in Antioch, Ca. Along with running the cattle operation on their ranch, they started the lodging business in 1996, not only was it a way to diversify their operation, but to help maintain and keep up the now 130 plus year old homes on their ranch. We hope you enjoy a little piece of the Western Atmosphere we have provided.
Thank you for Visiting Cockrell Ranch & High Desert Lodging
Enjoy a photo tour of the Ranch and Lodges ~ Photos by Debra Cockrell 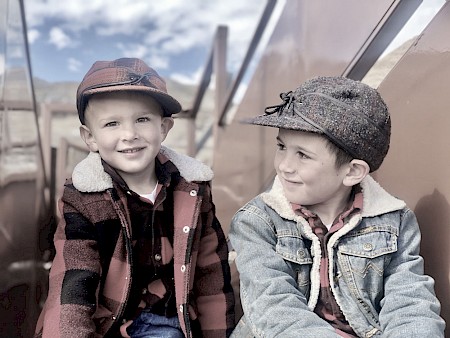 If Will and Deb Cockrell and their four kids had their name on a marquee in Las Vegas it would surely read, "Starring the Cockrell Family, the hardest working family in the cow business." It's hard enough to run a cow calf and and stocker operation the size of theirs, but throw in a list of all the other things they do and it would wear a person out just contemplating such a challenge. Although the ranching came first their lodging, photography, trucking and cattle marketing activities have also helped pay the bills.

Will and Deb complement each other perfectly: she's a bouncy, can-do optimist while he's more of a, "What's the next thing that can go wrong?" kind of guy. Deb definitely sees the glass as half full of opportunity while Will sees it as half full of hard work. Put the two together and you end up with a family that is never afraid to take chances on a new business venture, while at the same time being aware that bad luck, or a bad market, can hit you at any time.

Mention the name Cockrell in the northeastern corner of California, and you get the same response as you'd get if you uttered the name of Simplot in Idaho, or Haythorn in Nebraska. The Cockrells were among the first to settle in the Surprise Valley area and Will is a sixth generation rancher there. 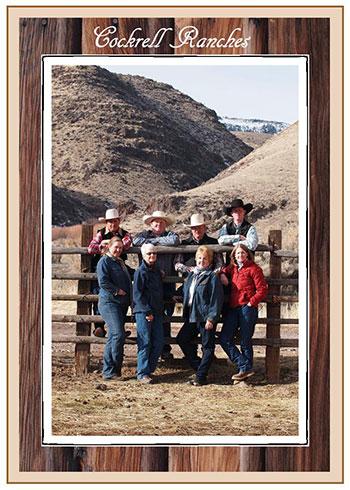 For awhile it looked like Will might break from the family business when he received his automotive technician degree at Wyoming Tech. But that was just Will being Will. It was just good, conservative thinking to have a fallback position just in case the cattle business was not kind to them. Will was always going to be a rancher, it's in his DNA and he's the kind of guy you can't picture doing anything else. So why does he have that mop and toilet plunger in his hands? We'll get to that in a moment.

After the couple married in 1979 they partnered with Will's parents, William and Betty Cockrell in the cattle business. Then in 1988 they purchased one of the family's former ranches. To keep it they've had to be creative. When an old house on the ranch was going unused the couple renovated it and turned it into a lodge for extra income. That's how Cockrell Ranches High Desert Lodging (www.highdesertlodging.com) was born in 1997. Guests came to hunt, watch birds, ride their horses, fish in the area, hike or just to enjoy the panoramic views of mountains' meadows, cattle and wildlife. After the first house proved to be a winner Will and Deb decided to build another three bedroom lodge. That's how Will came to have the mop and plunger in his hands. One thing about this family, they've never been afraid of hard work.

As life often does, one thing led to another and another business was born. To decorate the walls of the guest lodges Deb started hanging some of her award winning photos. The initial idea was to help educate the city folks who stayed at their lodges, but a side benefit was that Deb fell in love with photography. You can see and feel the passion in her photos as well as a deep love for nature and the land. Besides bringing in extra income, Deb's photos have helped portray the rancher in a favorable light.

The same year that Will and Deb started their lodging business Will was asked by the Peeks of Shasta Livestock to become a rep for a video auction the Peek's co-owned. Will has since become one of the leading reps for Western Video Market as he helps to get top dollar for his friends and neighbors throughout California, Nevada and Oregon. Will gets so many cattle consigned that during the busy season he often sends Deb to ship some of the customer's cattle. Likewise, when things get busy at the Lodges Deb often asks Will to help change sheets and scrub floors.

Despite all their dawn to dusk hard work, Will and Deb have also managed to raise the nicest bunch of kids you'll ever meet. Cassie, Ashley, Wayne and Weston Cockrell are polite, hardworking and talented ranch kids. And being Cockrells, they all have serious a streak of entrepreneurship in their genes. That's probably due to a little project they had growing up. Like most parents Will and Deb worried about how they were going to put their four smart kids through good college. As they always do, the Cockrell's came up with a good idea. In 1999 the four Cockrell kids formed a partnership, called CAWW Partnership (the first letter of each child's name). The goal was for them to trade out their work on the ranch, putting up the hay, irrigating, and riding herd on the Cockrell cattle during the summer when they were out of school. In return Will and Deb would give them some pasture to run some yearlings. They all signed a contract and the kids borrowed the money from the bank using their life savings as collateral. We told you the Cockrells were never afraid to take risks!

The Plumas Bank loaned the four Cockrell kids the money to buy their first 100 head of stock and in so doing Cassie, Ashley, Wayne and Weston became the bank's youngest borrowers. At the time they ranged from 8 to 16 years old. They ran yearlings under this arrangement until the older kids, already in college, decided that the risks of running stockers in a volatile market outweighed the rewards. In a very timely move they pulled their chips off the table . . . but not until they had paid for their college educations with the aid of scholarships. (We told you they were smart!) Their timing in exiting the cattle market was akin to selling all your stocks just before the market crashed last year.

After having been in the saddle since they rode double with either their mom or dad since the age of three, it's no surprise that the Cockrell kids are top hands, one and all. They've all taken their turn riding drag as the family trailed their cattle back and forth every year to their Nevada range 28 miles away. 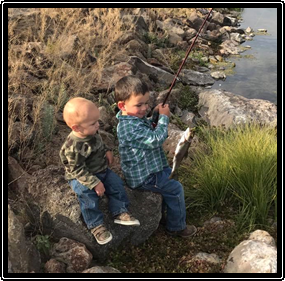 In addition to carrying on the family ranching tradition the four Cockrell kids have pursued other interests. After going to Chico State, Cassie has a career in finance and Ag appraising, Ashley is in her third year in Veterinary school at UC Davis, Wayne is back in his third year of college after returning from an eight month internship in Australia where he worked on cattle and sheep stations, and Weston is enjoying his last year at Surprise Valley High School. Weston is a skilled welder and he makes hand-rolled western wheel picnic tables that he advertises on the Internet.

How they find the time amongst all their for-profit enterprises for community service is a mystery but Will has been a Director of the Modoc County Cattlemen's Association, served as Modoc County District 1 Planning Commissioner for 10 years, continues a 15 year span of being on the Surprise Valley High School FFA Ag Advisory Committee, has been President of the Nevada Cattlemens North Washoe Unit twice, and is a Director of the Surprise Valley Soil Conservation District.

Deb received Lassen College Who's Who in American Jr. Colleges in Business Administration, is a 4-H - Cooking, Photography, Swine and Horse Leader, taught Quicken classes to many small businesses and ranchers through UC Davis extension offices, was President and Vice President of the Surprise Valley Chamber of Commerce and was Modoc County Cattlewoman of the year in 2001.

The Cockrell family was named the 2005 Modoc County Ranching Family of the Year and in the process has created a template for other ranchers to follow in trying to hold on to the ranch. They've done it with hard work and family values. Before reality television came along to numb the nation's mind, this hard working family was featured on TV shows like California Heartland and The John Tyson Show, and they've achieved all this success without once having ever appeared in front of Judge Judy or on page one of a grocery store tabloid.

Using the same straight forward, honest English that Will is known for, you could say the Cockrells are simply . . . "good people."

Ag is in my blood. Along with my husband and four children we are a family ranching operation in the far north eastern corner of California. We run a cattle operation and Cockrell's High Desert Lodging.

Using 2 of the extra homes on the ranch, which are over 130 years old. We re-did, upgraded and remodeled for Ranch Lodging. Accommodating families, horse groups, recreationalists, hunters and travelers. This consumes most of my time along with helping run the ranch. I strive to keep Agriculture alive and continually promote the beef industry to our city guests. I take great pleasure in knowing I helped turn their lack of knowledge or negative thoughts into knowing and leaving with a more informed positive thought. I'm a photographer as well and sell and decorate the lodges with a western theme.

I have been a member of the Modoc County Cattlewomen for 25 years. I've been a 4-H leader for Swine, Horse, Cooking and photography. Taught Quicken Classes to Ranchers and small businesses through UC Davis Extension office have been a past President for Surprise Valley Chamber of Commerce, Past president for Modoc County Cattlewomen and sit on the board for the California Cattlewoman as 2nd Vice President. I also sit on the USDA Farm Service Board for our County. I'm also involved in many Community Service activities. I enjoy time with family and friends and gardening. My Camera goes most everywhere I go. I enjoy the Ranch Life Photography which was a hobby that turned into a business called Whip and Spur Photography.

I always look forward to meeting and visiting with our guests that come from all over the country. If I can give a little agricultural information to many of our guests who don't understand what we do for a living and help them understand, than I feel I have done my job.

Nestled in the Surprise Valley it's closer than you think!